This is the story of a fellow who made a radical career change and the reactions he received from family, friends and colleagues.  Okay, I’ll skip the third person narrative…I was that fellow.

In the early 90’s I was the president of a small company based in Memphis, TN called TAYSA Brand, Inc..  TAYSA was a combination of the names our business partners daughter Taylor and our daughter Jessa.  TAYSA Brand owned several gourmet coffee shops called Espresso Etc., our own brand of coffees that we sold both retail and wholesale and a wholesale restaurant equipment business.  At our peak we had 25 full and part-time employees.  I was still in my 30’s at the time, a Rotary Club member, a board member of the local Chamber of Commerce, a regular biz-ness man.

When you own a small business with employees one of the things you have to do is pay your employees before you pay yourself, crazy right?  By the time we paid that pesky payroll often times my wife and I had very little to spend on luxuries such as the electric bill, food, etc..  One day I noticed an ad in a local free newspaper stating that Circus Circus Casino would soon be opening in Tunica, MS and they were looking for variety performers, jugglers, clowns and magicians.  Prior to our move from Nashville to Memphis, I had worked part-time as a magician and even as an actor at a local dinner theater.  Tunica was only 15 miles across the TN state line and we needed the money so I auditioned.  Low and behold, I got the gig!  I was now going to become a professional magician!

The reactions I received were extremely positive and many of them looked like this:

In reality the reactions were far from positive, so much so that years later I wrote a screenplay about it. 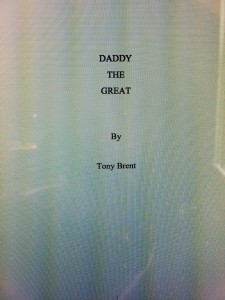 People are not overly receptive to radical changes in other people.  If you aren’t already aware of that then I daresay you haven’t made any radical changes in your own life.  I hadn’t shared my prior interest in the performing arts with people once we had moved to Memphis and therefore they had no background information to make my decision seem like a rational one.  It appeared as if suddenly I said “I’m going to be a magician!” 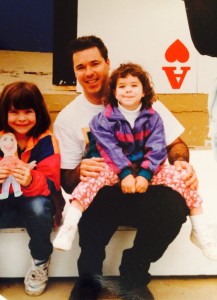 My daughters Jessa and Olivia in 1996 after my show at the now-defunct Libertyland Amusement Park in Memphis, TN. Two years after beginning my career as an entertainer.

The truth is we care about what others think and it helps when we receive support when making a radical career change.  Below are five ways you can ease that stress:

If you love making gift baskets out of used plastic grocery bags in your spare time and you think you can make a business out of it, but you’ve never shared this secret with another soul, you can’t expect them to be overly excited when you drop the bomb that you’ve quit your job as an attorney to start “Suzy’s Gift Grocery Baskets”.   Let your friends an family know how important it is to you.  Share your passion with them and do not be meek about it.

Carefully explain what it is you are doing and why you want to do it.  Often, times we throw it out there that we are quitting our jobs for what may appear a random career shift, then we sit back and say nothing, hoping others will ask more questions.  We take the stance that we don’t need to “explain” ourselves.  The truth is you may not need to explain yourself but if you aren’t willing to, don’t expect support.

There’s absolutely nothing wrong with simply saying “this is what I want to do at this point in my life and I’d really appreciate if you’d support me even if you don’t fully understand it.”

I recall once asking for a loan from the bank to fund our business and the loan officer saying “no one is ever going to be as excited about your business as you are.  Just because you think it’s a great idea, don’t expect everyone else to get on board with it.”  The key is to not expect everyone to understand immediately and if they don’t react positively then remain positive yourself and do not get defensive.

Not everyone is going to give you a thumbs up so prepare yourself for that fact ahead of time.  Some of your closest friends may not be supportive and it’s important that you do not take it personally.

In closing; I’ve been a full-time entertainer since 1994.  My wife, Mitzi continued to run our company along with our business partners until we eventually closed it in 1997.  Making the radical career change was one of the best decisions I’ve ever made.