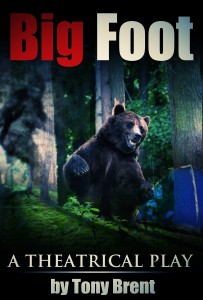 In 2014 I wrote what I thought was going to be a book but as it began to take shape I realized it seemed more suited to be a theatrical play; more on the reason why later.

“Big Foot” is the story of a small scouting organization called “The Trailblazers”, a group which happens to be filled with a few nasty, bullying boys.  Due to an organizational mix up they find themselves hiking on the first day of hunting season in the mountains of the Pacific Northwest.  In a frantic effort to stay alive and return home they accidentally stumble upon a battle between a grizzly bear and the mythical Big Foot!

The core idea was to craft a story that placed a group of boys in an unfamiliar situation and have them deal with underlying bullying and parental issues.  As I wrote I felt that altering it to a theatrical play format would allow schools to present it as a production at their own schools.  When I finished it I sent it out into the internet and social media ether to let the chips fall were they would.  Soon I forgot about it and set forth on my next project.

Fast forward nearly a year to the day later, a lady approached me following one of my live performances and said that my 2012 anti-bullying video “Pip-Squeak” had been inspiring and uplifting to her daughter who had been bullied in years past.  Her comments made me rethink the idea the “Big Foot” just might be needed; it might be important and worthy to the one boy or girl who is suffering.

“Big Foot” will be available on Amazon for Kindle later this week.  If you are a teacher or school administrator we will make it available completely free if you wish to present it at your school.